Studies with Nicolai Levashov – the beginning 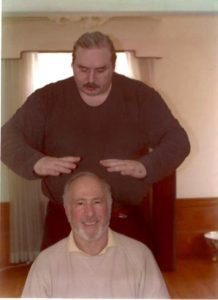 (“Studies with Nicolai Levashov”?was written a few years before I became a full time healer. )

by Richard A. Blasband, M.D.

I first consulted the healer and physicist, Nicolai Levashov, for my
chronic fatigue syndrome (CFS) in 1994. This had been diagnosed by
two medical homeopaths who were expert with a variation of the Voll
diagnostic device. They had each, independently, found inflammatory
pathology in the same major organ systems: the heart, lungs, liver, and
prostate. Pathologic structural changes in the heart were demonstrated
by electrocardiogram. Although I did not inform him of these findings,
other than my fatigue, Nicolai made the same diagnoses within ten
minutes during his initial examination.
With the first healing session I knew that Nicolai possessed remarkable
abilities to move energy in my body: I experienced electrical-like
currents moving through my body, followed by a ?heavy? feeling as my
organism took on the healing ?load? that Nicolai had placed upon it.
Within six months, with sessions two to three times a week, I was healed
of the frequent, intermittent palpitations from which I had suffered for
the previous three years. These changes were confirmed by
electrocardiography. Within 1 ? years I was healed of the major portion
of the other inflammatory changes and symptoms of CFS.
A few words about my professional background may help the reader to
better understand my subsequent relationship to Nicolai Levashov and
the extraordinary capacities and body of knowledge that he has given
me (and many others). I am a Board certified psychiatrist, classically
trained at the Yale University School of Medicine, where I also served on
the Psychiatry faculty. Following my psychiatric training I studied
Orgonomic Medicine with Elsworth Baker, MD, who had been appointed
by Wilhelm Reich to train physicians in his medical discipline. My ?day
job? is the practice of this intense form of bioenergetic mind/body
therapy, ?psychiatric orgone therapy,? developed by Reich to treat
emotional disorders (Reich 1949).
When I first met Nicolai I had been practicing as an orgone therapist for
about 30 years. In addition, during this period I had been active in
experimental research in physical and biological orgone energy and had
published over 60 papers in this field. Thus, the concept of a ?vital
energy,? as the basis of life functions and operative in the healing
process readily resonated with my personal belief system and
professional training and practice – despite my mechanistic,
reductionistic classical education.
This was not all that I brought to my work with Nicolai. For several years
prior to studying with him I had been active in experimental
investigations in the then nascent discipline of consciousness research
(Jahn and Dunne 1987) Through this work I had convinced myself of the
extraordinary capabilities of mental intention in manifesting objective
changes in physical reality [(Blasband 2000)]. Healing, utilizing Nicolai?s
method, depends, in large part, upon the use of heightened mental
intention to diagnose and to effect changes in human cellular structure
and physiology, the knowledge I had gained through my research
therefore served me well as I embarked upon the work of becoming a
healer.
I referred several of my therapy patients with structural damage from a
variety of disease processes to Nicolai. After several months, I began to
see changes in them that could not be attributed to my own treatment.
They were all clearly recovering from their somatic disease process, but
they were also moving far more rapidly through orgone therapy than I
had learned to expect from them during months of treatment. It was as
if their organism had become ?lubricated,? so that their bodily
movements were more facile and less ?armored.? In addition they all had
a ?glow? about their bodies, something that I had never seen on either
them or other patients. I was naturally eager to have this mental –
healing technique become part of my orgone-therapeutic
?armamentarium.? I was pleased when Nicolai agreed to accept me as a
student.
The formal, initial six week training period with Nicolai was the most
intensive, exciting time in my entire professional life. Our group of
twenty students, physicians, psychologists, businesspeople, and others,
met five times a week for three hours. Nicolai lectured for the first 2 3/4
hours on his findings about the nature of man and the universe. The
final fifteen minutes was devoted to Nicolai?s ?transformation? of our
brains and spiritual bodies through his use of conscious intention on
each of us individually and as a group. The didactic material, derived
from Nicolai?s research as a physicist and clairvoyant, included material
from physics, biology and the role of the spirit in its interaction with the
material world. This was the elementary foundation of the healing
work.
This was a new, exciting, coherent, paradigm incorporating classical
physics and biology and bringing new insight to riddles of the material
and spiritual world.
(Please continue with this article via the PDF link in the archive: “Studies with Nicolai Levashov”)